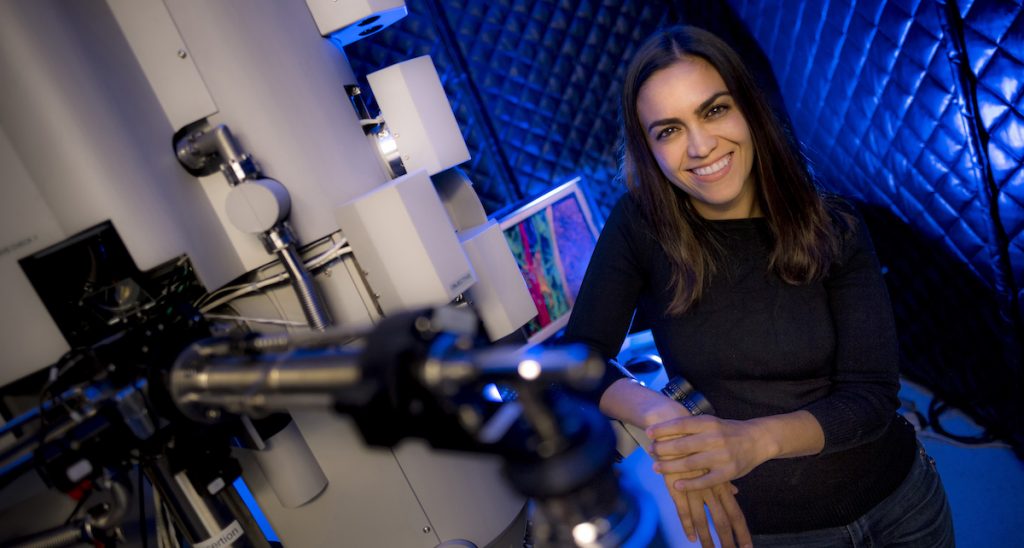 As a young physicist, Elizabeth was impressed by the ability of biology to operate on many length and time scales in order to perform its functions. She began her incursion into biomedical sciences by trying to develop methods that could make challenging problems that bridge multiple scales tractable for simulations.

During her graduate studies in the lab of Klaus Schulten as a Fulbright Fellow, she worked on computational methods to combine scales into molecular simulations. In that process, she was lucky to learn about cryo-electron microscopy (cryo-EM) from Joachim Frank in a very productive collaboration that led to the development of a method to combine X-ray crystallography structures with cryo-EM data using molecular dynamics simulations (Molecular Dynamics Flexible Fitting). This opened her eyes to the power of electron microscopy, and she saw an opportunity to use it as a biophysical tool that could not only unveil averaged structures of macromolecules, but could show how they operate in their natural environment.

A short stint in the Marine Biological Laboratory (MBL) for Physiology Course convinced her that open problems in cell biology needed quantitative questions posed in the context of the structural environment in which macromolecules operate.

She decided that to work in the problems in cell biology that interested her, she needed to compliment her skills by becoming  an experimentalist. She obtained a Marie Curie Postdoctoral Fellowship to work in the lab of Wolfgang Baumeister at the Max Planck Institute of Biochemistry in Munich, where she learned and developed tools to realize the power of cryo-electron tomography for cells.

Combining these multidisciplinary skills, her lab at UCSD is fully equipped for taking on the challenge of quantitative cell biology, using tools from cell biology, cryo-electron microscopy and tomography, computational analysis, and integrative modeling. This potent combination enables the visualization of macromolecular complexes in their native environment and derive their structure, context, and interaction partners.

Besides method development, her lab pursues three areas of research:  (1) understanding the structure and function of LRRK2 in cells, the main driver of genetic driver of Parkinson’s disease,  (2) charting the nuclear periphery, as nuclear biology remains one of the most exciting challenges in the cell, and it is unexplored territory structurally, and (3) finding new processes in bacterial cell biology using cryo-ET as an imaging tool.

In 2016, she was granted an NIH Director’s  New Innovator Award, which allowed her to pursue high-risk high-reward research  cryo-electron tomography (cryo-ET)  to advance structural cell biology.  In 2017, she was named a Pew Scholar.

Elizabeth was selected to become a Howard Hughes Medical Institute (HHMI) Investigator in 2021, which provides her the time, resources, and freedom they need to explore uncharted scientific territory.