Tomograms collected for this study so far can be found here.

Bacillus subtilis is a Gram-positive bacteria and can undergo a unique process of sporulation under starvation conditions. During sporulation, the cell divides asymmetrically to produce a smaller cell called forespore and a larger cell called mother cell which eventually engulfs the forespore.

A limiting factor in the study of cell biology is visualizing biological structures at high spatial resolution inside the cell. This is especially true for small organisms like bacteria, whose size is similar to the diffraction limit of light microscopy. 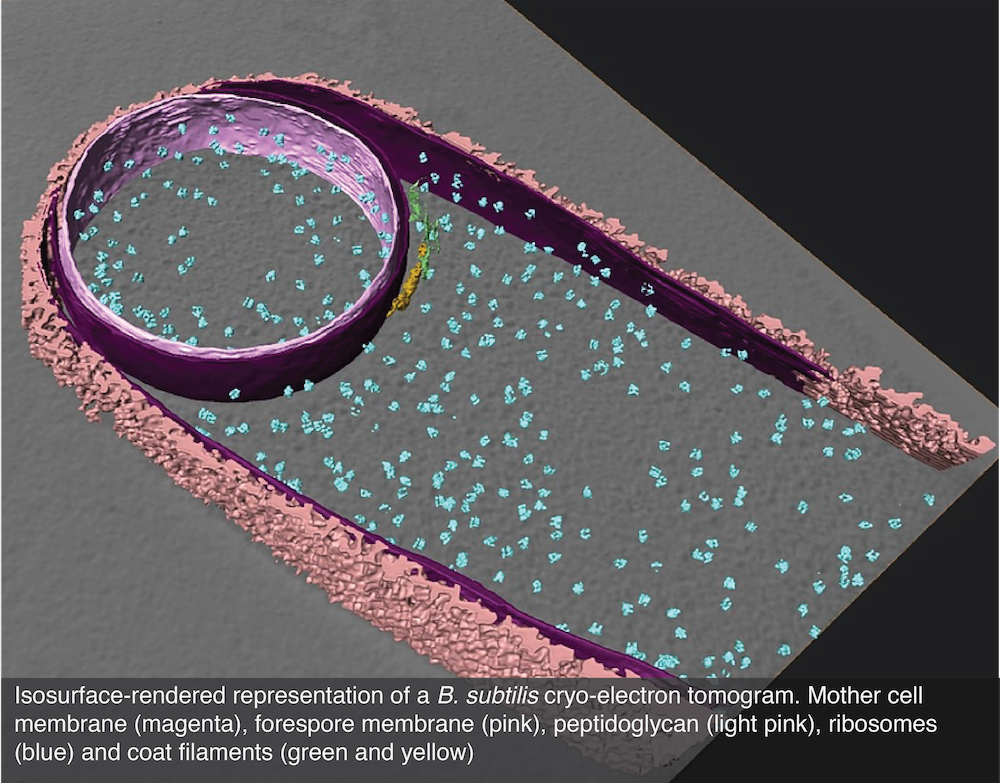 We aim  to visualize the process of sporulation in the bacterium B. subtilis using cryo-electron tomography (cryo-ET), a technique that allows the three-dimensional (3D) reconstruction of cellular structures in near-native state at molecular resolution. During sporulation, an asymmetrically-positioned septum divides the cell into a larger mother cell which eventually moves forward to engulf the smaller forespore. After engulfment, the forespore is fully enclosed within the cytoplasm of the mother cell, where it matures in a process involving the synthesis of peptidoglycan (PG) cortex and a proteinaceous coat. Upon maturation, the mother cell lyses releasing the spore to the environment, where it remains dormant until the conditions are appropriate for germination.

The role of PG remodeling and chromosome translocation during engulfment

After the formation of the polar septum, the forespore chromosome is trapped at the septum, which is subsequently transported from the mother cell to the forespore. In the following two manuscripts we showed that chromosome translocation increases forespore turgor pressure, stimulating forespore growth by extending the forespore membranes and stretching the septal PG. Further, by imaging wild-type sporangia, engulfment mutants, and sporangia treated with PG synthesis inhibitors, we proposed a novel molecular model for engulfment membrane migration in which a limited number of mother cell SpoIIDMP complexes tether the membrane to and degrade the new PG ahead of the leading edge, thereby generating an irregular engulfing membrane front.